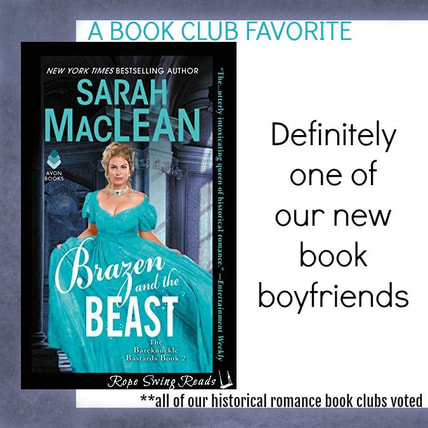 When Lady Henrietta Sedley declares her twenty-ninth year her own, she has plans to inherit her father’s business, to make her own fortune, and to live her own life. But first, she intends to experience a taste of the pleasure she’ll forgo as a confirmed spinster. Everything is going perfectly... until she discovers the most beautiful man she’s ever seen tied up in her carriage and threatening to ruin the Year of Hattie before it’s even begun.

When he wakes in a carriage at Hattie’s feet, Whit, a king of Covent Garden known to all the world as Beast, can’t help but wonder about the strange woman who frees him—especially when he discovers she’s headed for a night of pleasure... on his turf. He is more than happy to offer Hattie all she desires... for a price.

Soon, Hattie and Whit find themselves rivals in business and pleasure. She won’t give up her plans; he won’t give up his power... and neither of them sees that if they’re not careful, they’ll have no choice but to give up everything... including their hearts.

Okay... this is definitely one of Rope Swing Reads (and quite a few of the book clubs) new book boyfriends. More importantly, it is our new heroine! Hattie is a strong-willed, determined, inquisitive soul who refuses to be man-handled.
We love her.

She is finally getting the life she wants of being in charge of her own money and able to live how she chooses, but Hattie also wants one night of pleasure before going into her single-for-life existence. She takes off for the dangerous, but private, crime-filled area known as Convent Garden. The King of this sinful area, Whit, AKA BEAST, who has taken refuge in her carriage after being beaten, meets her and yeah…

The chemistry between these too just melted off the pages, but the truth in their relationship jumped out like a wrecking ball. It’s playful, fun, and heated. I loved this most because Hattie doesn’t become docile woman who gives up everything for a man or weaned under the strong arm of BEAST. She stands her ground, unafraid. She sees the man beneath the BEAST and falls head over heels without losing herself in the process.

He, although maddened that he can’t bend her to his will, also loves her because of it. All in all, it gets added to my favorite Historical (Regency, British, Victorian) Romance List.