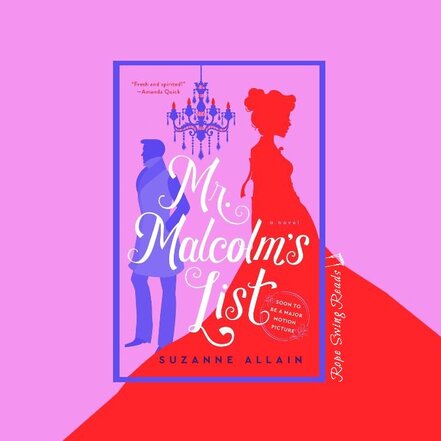 buy book here
The Honorable Jeremy Malcolm is searching for a wife, but not just any wife. He's determined to elude the fortune hunters and find a near-perfect woman, one who will meet the qualifications on his well-crafted list. But after years of searching, he's beginning to despair of finding this paragon. And then Selina Dalton arrives in town…

Selina, a vicar's daughter of limited means and a stranger to high society, is thrilled when her friend Julia invites her to London.  Until she learns it's part of a plot to exact revenge on Mr. Malcolm. Selina is reluctant to participate in Julia's scheme, especially after meeting the irresistible Mr. Malcolm, who seems very different from the arrogant scoundrel of Julia's description.

But when Mr. Malcolm begins judging Selina against his unattainable standards, Selina decides that she has qualifications of her own. And if he is to meet them he must reveal the real man behind...Mr. Malcolm's List.

First: read this book.
Second: just take mental note that Outlander’s Sam Heughan will be starring in the movie.

We must admit, sadly, we had not previously read the book which was originally released in 2009. However, upon hearing about Sam joining the cast of the movie and the re-release...well, we all had to give it a shot. Several of the book clubs added it to their regency lists and soon the reviews were pouring in.

Personally, I love a good tough exterior/soft-at-heart kind of guy, but that didn't seem to be the overall consensus of the book club readers. The chemistry between Mr. Malcolm and Selina was warm and sweet which was unexpected given the description, but not unwelcome. All in all we rated the book on average around a 3.5-4. I think we may have bumped it up a bit due to the movie casting Sam...still in all a very enjoyable read!