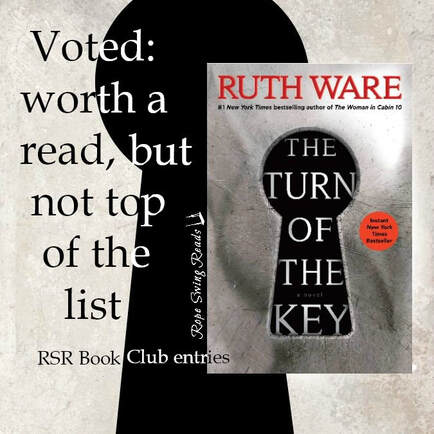 buy book here
​When she stumbles across the ad, she’s looking for something else completely. But it seems like too good an opportunity to miss—a live-in nannying post, with a staggeringly generous salary. And when Rowan Caine arrives at Heatherbrae House, she is smitten—by the luxurious “smart” home fitted out with all modern conveniences, by the beautiful Scottish Highlands, and by this picture-perfect family.

What she doesn’t know is that she’s stepping into a nightmare—one that will end with a child dead and herself in prison awaiting trial for murder.

Writing to her lawyer from prison, she struggles to explain the unravelling events that led to her incarceration. It wasn’t just the constant surveillance from the cameras installed around the house, or the malfunctioning technology that woke the household with booming music, or turned the lights off at the worst possible time. It wasn’t just the girls, who turned out to be a far cry from the immaculately behaved model children she met at her interview. It wasn’t even the way she was left alone for weeks at a time, with no adults around apart from the enigmatic handyman, Jack Grant.

She knows she’s made mistakes. She admits that she lied to obtain the post, and that her behavior toward the children wasn’t always ideal. She’s not innocent, by any means. But, she maintains, she’s not guilty—at least not of murder. Which means someone else is.

Going into this I knew immediately it would be an unreliable narrator because it is written as letters. From the start I didn’t believe any of it. The nanny, one who took a job at a creepy old mansion, run electronically, is telling her side of the story to her attorney… from prison.

Stop here. I didn’t think I would enjoy it, was reading it along with one of my book clubs, so I can admit I wasn’t FULLY invested.

Continuing, it became so descriptive in creepy atmosphere alone that about a third of the way through, I sat back and decided to soak it in, one ominous sentence at a time.

The middle third of the book was edge-of-my-seat, drinking-coffee-like-water (probably wasn’t a good idea with this kind of book, but hey, not the brightest at 2am) and waiting for the big twist or reveal.

I usually only post books that do something for me, that make me feel deeply or think differently, or love better… (unless I get a greater reaction from the majority of the book clubs, because hey, I’m human), but this one- it did do something for me, the last portion of the book seemed a bit thrown at me, but in the end I DID NOT GET TO SLEEP that night. (Granted, it could’ve been the coffee, but seriously I know it was the book.)

It was so spine-chilling, goose-bumpy, creeped-me-out-at-all-the-noises-my-fairly-new-house-was-making that I finally turned on a fun, happy movie and made breakfast. So in the end, it was very entertaining. Did I love it? No. Was it worth the read, YES!

The book clubs though- they all loved it!
© COPYRIGHT ROPE SWING READS 2016-2020 ALL RIGHTS RESERVED