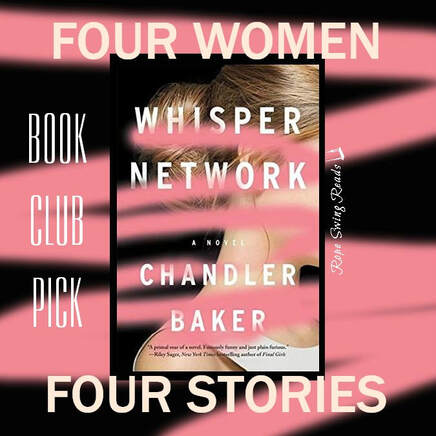 buy book here
​​Four women learn their boss (a man who’s always been surrounded by rumors about how he treats women) is next in line to be CEO—what will happen when they decide enough is enough?

Sloane, Ardie, Grace, and Rosalita are four women who have worked at Truviv, Inc., for years. The sudden death of Truviv's CEO means their boss, Ames, will likely take over the entire company. Ames is a complicated man, a man they’ve all known for a long time, a man who’s always been surrounded by...whispers. Whispers that have always been ignored by those in charge. But the world has changed, and the women are watching Ames’s latest promotion differently. This time, they’ve decided enough is enough.

Sloane and her colleagues set in motion a catastrophic shift within every floor and department of the Truviv offices. All four women’s lives—as women, colleagues, mothers, wives, friends, even adversaries—will change dramatically as a result.

"If only you had listened to us,” they tell us on page one, “none of this would have happened."

By whispering, whose secrets were we keeping anyway - ours or theirs? Whose interests did our silence ultimately protect?

Ever wished you had a band of sisters to help you rid the world of wrong? This is your book!

It’s definitely Women’s Lit, not mystery in my opinion and I think if you go into it with a slow-burner, woman power read in your mind you’ll enjoy. It’s more like 9 to 5 (1980 movie that you MUST SEE if you haven’t, no matter your age) amped up to serious modern day, with a few small curves.

While you probably won’t LOVE any of the women like you will the ones in 9 to 5, you will grow to understand them in ways that help define their behavior.  You see small parts of yourself in each of them if we’re being honest here.

And seriously, isn’t stepping forward as women to expose a wrong and being accused in retaliation the go-to response of all time. Will that ever truly change? Likely not, what is changing is that women are not allowing themselves to stay silent because of it.

That’s the true meaning in this book and for that matter the whole #metoo.
© COPYRIGHT ROPE SWING READS 2016-2020 ALL RIGHTS RESERVED